The Guardian today knocks back the argument that UK vice chancellors are not overpaid — indeed, are grievously underpaid — when you take account of the extraordinary talents they must bring to the job, and compare them with the appropriate reference group of CEOs and American university presidents. They fill their remunerations committees with CEOs who will swear that no one worth their salt would get out of bed for less than half a million, and what can you do but pay what it costs to hire someone who can manage this huge and complex organisation and wheedle the high-class donors. 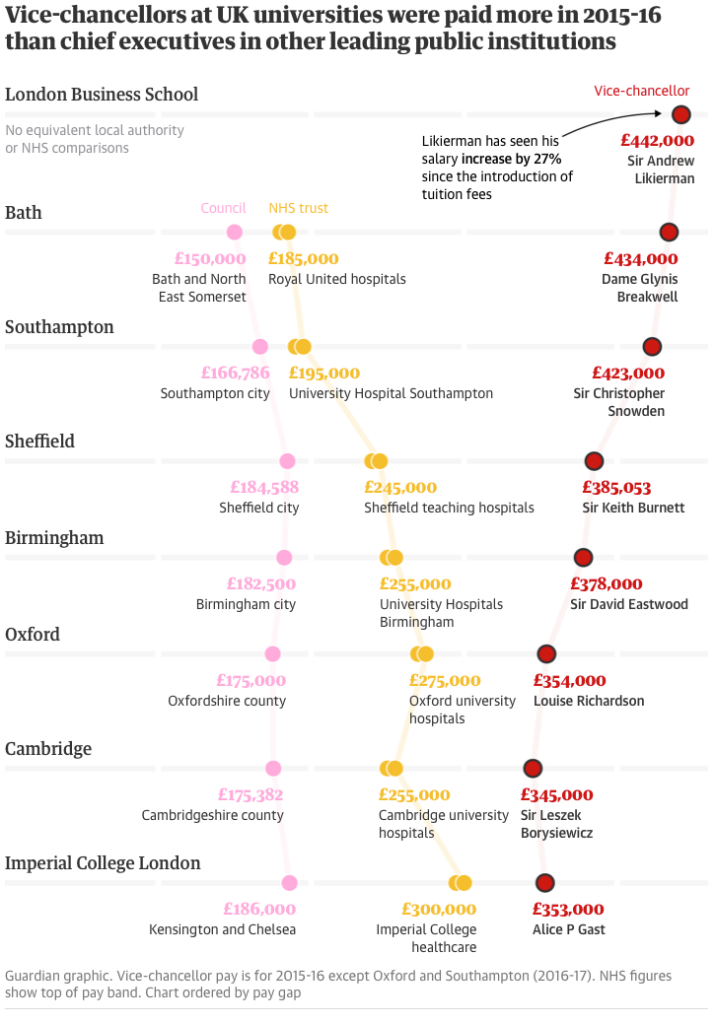 What The Guardian points out is that there are plenty of people managing similarly complex organisations for a lot less money, because they see their personal mission as being not purely self-aggrandisement, but the public good. For example, the Oxford vice chancellor earns £354,000, while the head of the Oxford university hospitals earns £275,000, and the chief executive of the Oxfordshire county council only £175,000. At this point they’ll appeal to the “global marketplace”, where vice chancellors (but apparently not academics) are traded around. I don’t know why a British hospital manager couldn’t be hired abroad, but there it is.

They are happy to cite the “global marketplace” to plump up their own salaries, but when they come to setting academic salaries it’s all constraints-of-the-national-economy, and seen-to-be-careful-with-student-tuition-fees. Oddly enough, the “global” search for Oxford vice chancellors has heretofore always turned up either someone British, or, recently one who is Irish and one from the Commonwealth (two chancellors ago, from New Zealand). Weird coincidence.

As I discussed here, I have never seen any attempt to provide evidence that the university actually benefits from having the top-quality world-class scholar-manager, or if we could get by just about as well with a cheaper product. (The article I cite, by economist David Branchflower, cites a book that argues that there is strong evidence in favour of putting top academics in charge of universities, and then, in one of the great non sequiturs of all time, concludes that salaries must therefore be high for vice chancellors — as though academics generally command higher salaries than professional administrators.

In thinking about this, I was reminded of one of the odder features of Nazi rule in the 1930s, the Führerprinzip, the “leader principle”. The structure of the Nazi state, with one leader at the top, was supposed to be reproduced in miniature not only in every local government, but in every professional organisation, every workplace, every club, and indeed in every family. It might have seemed irrelevant to important affairs of state whether the local bread factory had a little tyrant at the top taking no one’s council but his own, but this was actually an important component of Nazi propaganda, and of the efforts at Gleichschaltung (uniformisation).*

Thus we have well-functioning university departments in the UK dumping their qualified and competent administrative staff, under pressure to reorganise with a more hierarchical structure, with one more-qualified boss at the top and multiple unqualified and poorly paid drones taking orders. And when you ask why, you find out that there was pressure from the central administration. Ultimately, every act of concord or collegiality, however small, tends to diminish the leader at the top.

* This parallel between state authority and more intimate authority is familiar to anyone who has read the Purim Megillah, where the story is set into motion by the king’s fury at his queen’s minor disobedience. While he is inclined to overlook the matter, his advisor points out,

Vashti the queen hath not done wrong to the king only, but also to all the princes, and to all the peoples, that are in all the provinces of the king Ahasuerus. For this deed of the queen will come abroad unto all women, to make their husbands contemptible in their eyes, when it will be said: The king Ahasuerus commanded Vashti the queen to be brought in before him, but she came not. And this day will the princesses of Persia and Media who have heard of the deed of the queen say the like unto all the king’s princes. So will there arise enough contempt and wrath. If it please the king, let there go forth a royal commandment from him, and let it be written among the laws of the Persians and the Medes, that it be not altered, that Vashti come no more before king Ahasuerus, and that the king give her royal estate unto another that is better than she. And when the king’s decree which he shall make shall be published throughout all his kingdom, great though it be, all the wives will give to their husbands honour, both to great and small.’