Britain’s presumptive next prime minister has been demonstrating the kind of top-drawer platitudes that the nation will be showered with after her investiture tomorrow:

“I have a bold plan that will grow our economy and deliver higher wages, more security for families and world-class public services,” Truss said in a statement, as the curtain came down on the often bitter race with her 42-year-old rival Sunak.

“If I am elected prime minister, I will never let anyone talk us down and I will do everything in my power to make sure our great nation succeeds.”

Now, this may be one of these Anglo-American language confusions (like the perennial embarrassment over “pants”), but when I hear the phrase “never let anyone talk us down” I think of an image like this:

Boris Johnson has aroused the ire of many classical historians for his dubious claim that the Roman Empire was destroyed by “uncontrolled immigration”. What is most striking is the unquestioned implication that when Romans moved outward, conquering and enslaving their neighbours, that was GLORY, and much to be lamented when it was (possibly) destroyed by their ultimate failure to prevent people from “the east” from migrating in the opposite direction. It seems to me, if there’s anyone who had a problem with uncontrolled migration from the east it was Carthage.

From The Guardian today:

Gove has been subjected to a lot of mockery for supposedly having dismissed the value of (economic) expertise during the Brexit referendum campaign, but perhaps he was misquoted. Maybe what he really said was

people in this country have had enough of exports.

Many years ago I read to my daughter a children’s book in which a little girl learning to ride a bicycle keeps running into objects like trees and lampposts. A bicycle instructor explains to her that when you become too fixated on an obstacle it exerts a strong psychological pull, so that the very exigency of evading it leads to a crash.

I used to wonder whether this was a real phenomenon. I don’t anymore…

Actually, I’ve long thought the second Iraq War was an example of the same phenomenon. There was no possibility that there wouldn’t be a war, because once they’d started to consider it Bush and Blair couldn’t bare not to see how it would turn out.

One of the newspaper covers promoting pro-Brexit celebration:

It’s hard to miss that the jubilant lady draped in the Union Jack has a US flag right behind her. A message to those who still suppose Brexit will bring “independence”. (In case they didn’t get the message when the Prime Minister stood up in parliament and pretended to take Jared Kushner’s Middle East “peace plan” seriously.)

And in case any Jews or Muslims might have thought they would be part of this “glorious new Britain”, they have a fucking CRUSADER in their masthead!

Once it became clear that I would be staying indefinitely in the UK, I had long planned to apply for UK citizenship. I am a strong believer in democracy, and I thought it would be the good and responsible thing to vote and otherwise take part in politics.

Then came Brexit, and this, naturally, led me to think about Henri Bergson. Born to a Jewish family, Bergson moved gradually toward Christianity in his personal life, he considered himself a Christian from the early 1920s. By the 1930s he was making plans to convert formally to Catholicism, but held off because of solidarity with the increasingly threatened Jewish community. A few weeks before his death, Bergson left his sickbed — having rejected an offered exemption from the anti-Semitic laws of Vichy — to stand in line to register as a Jew.

He wrote in his will:

My reflections have led me closer and closer to Catholicism, in which I see the complete fulfillment of Judaism. I would have become a convert, had I not foreseen for years a formidable wave of anti-Semitism about to break upon the world. I wanted to remain among those who tomorrow were to be persecuted.

For a while, then, I deferred applying for citizenship, out of solidarity with my fellow migrants. And then I went and did it anyway. The stakes are obviously much lower than they were for Bergson. And while I regret having to renounce the migrant identity, which suits me well, I also see that this isn’t an entirely noble inclination, as it also excuses me from taking a citizen’s responsibility for the nation’s xenophobic turn. It’s easy to blame those dastardly “British”. The permission to acquire citizenship reflects the growing responsibility for the society that one acquires merely by living here.

I also can’t resist noting that Bergson’s first publication was the solution of Pascal’s problem in Annales des Mathématiques, for which he won the first prize in mathematics in the Concours Général. On learning that he was preparing for the École normale supérieure entrance examination in the letters and humanities section, his mathematics teacher reportedly exclaimed

You could have been a mathematician; you will be a mere philosopher.

A popular approach to defining subjective probabilities is to ask, under what terms would you be willing to bet on this outcome. “I’d be willing to bet” is a common way of expressing confidence. Presumably that’s what Michael Gove is appealing to here:

Gove insisted the UK would still definitely leave on 31 October, saying he had even made a bet with Matt Hancock, the health secretary, that it would happen.

Sounds pretty convincing. Except… It’s another member of the cabinet that is taking the other side of the bet. And not just any other member, but the health secretary, whose preparations are kind of important.

So, we are left with the following options:

The Duke of Wellington is supposed to have said, “The Battle of Waterloo was won on the playing fields of Eton”. Whether or not that ever well described the preparation of the British military I cannot say, but I feel like to understand British politics you need to go back earlier, to the playground of whatever toff kindergarten prepares the English elite for Eton. How else to explain Boris Johnson thinking he can pressure the Labour Party into agreeing to an election on Dominic Cummings’s preferred schedule by calling Jeremy Corbyn “frit”, a “chlorinated chicken”, or “a great big girl’s blouse“.

This last expression struck me as so bizarre — not only is it much too ungainly a phrase to function effectively as an insult, but I can’t think of another term of abuse that compares the target to an item of clothing — but various explainers have revealed that it is indeed a slang expression from the period of Johnson’s childhood, and that Johnson has been known to use it in the past.

It never ceases to astonish me, not just that someone in a position of influence would publicly speak this way, but that his co-partisans seem to find it normal, acceptable, not at all embarrassing, even powerful.

None of this can compare to early-twentieth-century British playground politics. One of the most horrifying details of Christopher Clarke’s meticulous analysis of the march to war in 1914 The Sleepwalkers was his adumbration of the temperamental state of mind prevailing in the British foreign-policy establishment in the decade before the war, illustrated by the comment of UK Ambassador to France Sir Francis ‘the Bull’ Bertie that the Germans wanted “to push us into the water and steal our clothes.” 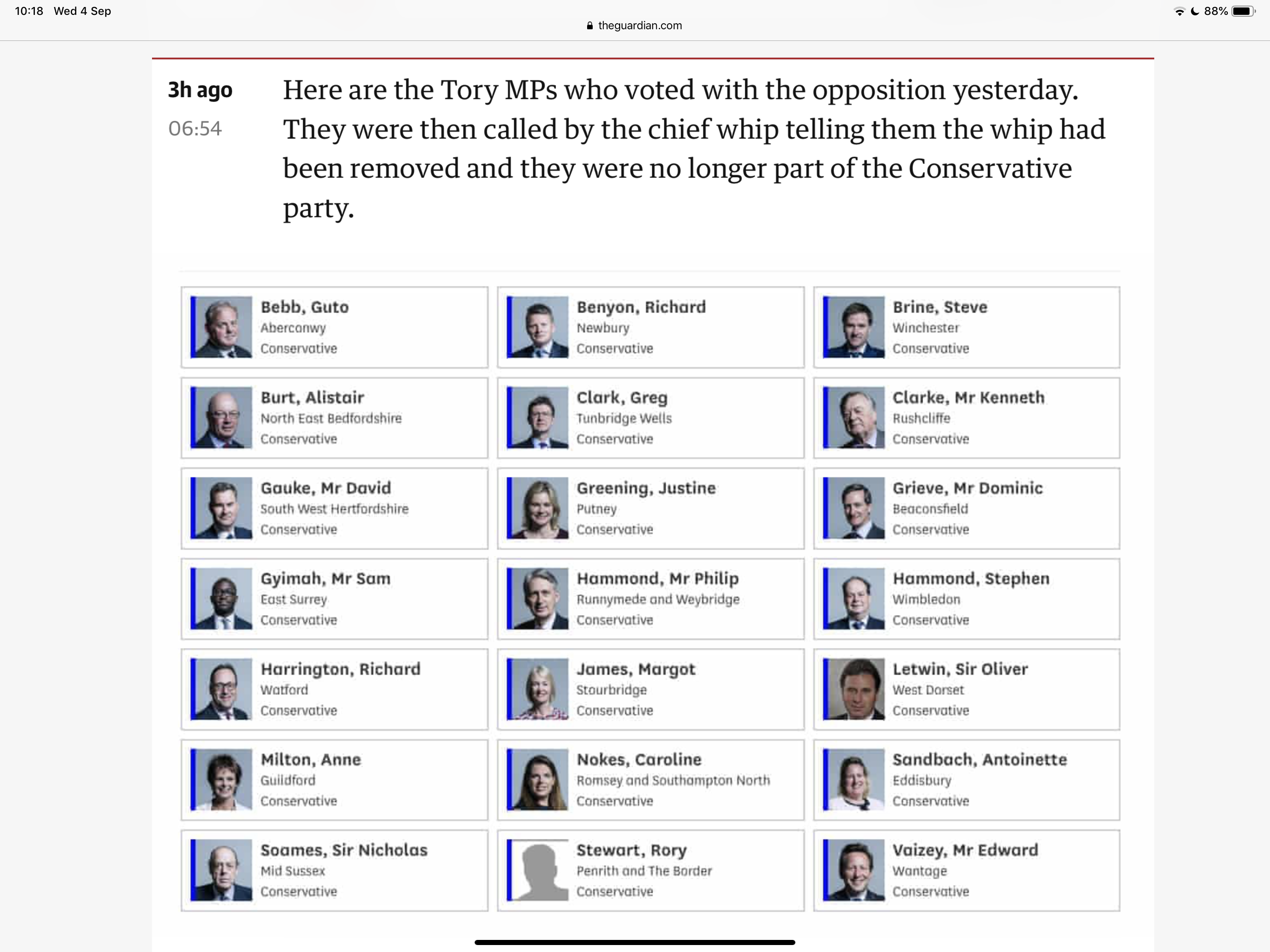 Among the many recurring farcical features of the Brexit morass has been the British government’s willingness (as I discussed two years ago) to proclaim, that its Brexit plans and negotiating position needs to be kept secret from the UK public because, in its favoured gambling vernacular, its ability to bluff would be fatally undermined by showing its cards. In recent weeks we have learned that no-deal Brexit is easily managed, nothing to be frightened of; and yet, the EU will truckle at the whiff of grapeshot, once it is clear that Parliament cannot rescue them from this terrifying fate. That proroguing Parliament changes nothing, and yet will persuade the EU that the UK has thrown its steering wheel out of the car in its game of diplomatic chicken.

What is odd is not that the government might have a public posture (e.g. no-deal Brexit is easily manageable) at odds with its private beliefs (e.g. no-deal Brexit will be hugely destructive). It is that they openly and persistently proclaim these contradictions, using poker metaphors to justify their contradictions. As though their diplomatic counterparties in Brussels would not also read their allusions to bluffing and draw the appropriate conclusions.

I am reminded of an anecdote in David Sedaris’s Me Talk Pretty One Day. Sedaris, an American writer who lived many years in France, describes the conversation of two American tourists who were crammed in close to him in the Paris Metro:

“Peeew, can you smell that? That is pure French, baby.” He removed one of his hands from the pole and waved it back and forth in front of his face. “Yes indeed,” he said. “This little foggy is ripe.”

It took a moment to realize he was talking about me.

The woman wrinkled her nose. “Golly Pete!” she said, “Do they all smell this bad?”

“It’s pretty typical,” the man said. “I’m willing to bet that our little friend here hasn’t had a bath in a good two weeks. I mean, Jesus Christ, someone should hang a deodorizer around this guy’s neck.”

It’s a common mistake for vacationing Americans to assume that everyone around them is French and therefore speaks no English whatsoever… An experienced traveler could have told by looking at my shoes that I wasn’t French. And even if I were French, it’s not as if English is some mysterious tribal dialect spoken only by anthropologists and a small population of cannibals. They happen to teach English in schools all over the world. There are no eligibility requirements. Anyone can learn it. Even people who reportedly smell bad…