After plunging UK travel into chaos, British Airways CEO Alex Cruz announced that he will not resign. And why should he? BA needs his bold leadership now more than ever. In the spirit of not letting a crisis go to waste and no such thing as bad publicity and there’s no platitude like business platitudes, I’m expecting him to announce that this was actually a successful promotion for BA’s new motto: Slow Travel©.

Imagine the scene: First a harried woman being yelled at by her boss, forced to rush through some task, papers dropping every which way. Voiceover: Your work life can be pretty stressful. Rushing all the time.

Cut to: Same woman with her family, rushing through an airport, trying to catch a flight to Disney World or Mallorca. Boarding closed, children in tears. Voiceover: You don’t need the same stress on your holidays.

Cut to: Another family happily strolling through the duty-free selection. Voiceover: When you fly with British Airways, our international team of IT experts will make sure that you have untold hours to browse through the world-class shopping attractions of Heathrow… Maybe even days!

Cut to: Happy children playing in the Terminal 2 play structure. Voiceover: Joyful moments like this can’t be rushed!

Cut to: Passengers sleeping on the floor and seats in the terminal. Voiceover: Travel means taking the time to get close to new people.

Cut to: Alex Cruz saying “Slow travel. Because Bland Acquiesence is what BA is all about!”

Nixon press secretary Ron Ziegler used to be the gold standard for political obfuscation, with his declaration (when he had to reverse previous insistence that no one in the White House was involved in the Watergate break-in “This is the operative statement. The others are inoperative.”

Trump, recognising that his Watergate reboot won’t pull in 21st-century viewers if they have to watch a “third-rate burglary” investigation playing out over 2 1/2 years, is ramping up the malfeasance (Russian espionage! billion-dollar bribes!) and the pace, while still hitting the classic Nixonian marks (asking the CIA to block an FBI investigation!) One place where they’ve been exceeding their originals is in the obfuscatory rhetoric. Following on Kellyanne Conway’s celebrated rechristening of lies as “alternative facts”, we have budget director Mike Mulvaney explaining why Trump’s explicit promise not to cut Medicaid was now being reversed. NY Times reporter John Harwood:

at briefing today, Mulvaney told me Trump promise not to touch Medicaid had been overridden by Trump promise to repeal/replace Obamacare https://t.co/WSafn6ighT

“Overridden”! Like a good reboot, it’s reminiscent of the Zieglerian original, yet somehow punchier, with a novel twist. (Tens of millions of poor people losing access to healthcare. Great cliffhanger!) The critics, though, might carp at them reaching for effect this way on their policy statements, where Nixon himself was pretty solid, leaving perhaps less headroom for further amplification when we get to the corruption charges.

Some are saying the show might not even be renewed for another season.

By the way, I’ve just read Evan Thomas’s biography Being Nixon. I’ve never had much patience for those who claim that Nixon got a raw deal over Watergate — the burglary and cover-up were just the most salient aspect of the presidential malfeasance and abuse of power — but I understand better why many people would have seen his fall as tragic. Great talents that could have served the country well, sadly bonded to a flawed personality that dragged himself and the country into a mire of recriminations.

Comparing Trump to Nixon is deeply unfair to Nixon.

Oxford University’s ruling body, the Congregation, had a meeting recently to discuss the possibility of abolishing the university’s mandatory retirement age, with the somewhat orwellian title of Employer Justified Retirement Age (EJRA). EJRA is provided for in the 2010 Equality Act that banned various sorts of discrimination, including age discrimination. Every serious discussion of this topic uses pilots as an example: Safety functions depending potentially on fast reflexes, known to decline with age, and hard to evaluate individually. Not really analogous to a typical university post. Instead, the argument is that the old need to be pushed out to make way for the young, a matter of intergenerational fairness. Of course, there is nothing special about universities in this point — except that university posts are seen (by some) as singularly attractive. It’s a kind of discrimination Catch 22: Anti-discrimination law allows people to keep their jobs as long as they wish (and are performing them competently) only if it is a job that is unpleasant and that they would rather quit as soon as possible. If you have an attractive job that you’d like to keep doing, then you have to retire to make way for new people.

Although my research on ageing has concerned itself largely with technical issues, and often with evolutionary theory rather than social issues, I have been interested from the start in questions of variability in ageing patterns, and I have read some of the literature on the destructive effects of age stereotypes. Personally, I’ve always felt strongly attracted to the sartrean dictum that existence preceeds essence and have reacted viscerally to constraints placed on people because of the categories they are associated with. END_OF_DOCUMENT_TOKEN_TO_BE_REPLACED

It’s been reported that a passenger tried to force his way into the cockpit on a passenger flight from Los Angeles to Honolulu. Two US Air Force fighter jets then “escorted” the plane to its destination. It’s an interesting choice of words, because one ordinarily thinks of an escort as being on your side — your escort protects you, or raises your status. A fighter escort is usually protecting a group of bombers. In this case, though, the presumably unstated purpose of the escort was to shoot down the passenger plane if it seemed to become dangerous. Awkward.

I’ve tended to think of republicans as a fairly humorless bunch. But with information coming out more about the pattern of top Republicans making “jokes” (Trump on stopping the Flynn investigation, House Majority Leader McCarthy on Trump being paid by the Russians) under conditions of absolute secrecy, I have to consider the possibility that there’s a whole underground world of Republican humour.

And they’re obviously sincere, since they also mistook President Obama’s secret private warning about Flynn for a joke.

Microsoft responds to the worldwide ransomware attack on Windows XP:

The governments of the world should treat this attack as a wake-up call.

A wake-up call where they kill sick people in need of medical treatment. I’m not staying in that hotel again.

Fortunately, it turns out that no one was responsible: not Microsoft, not the NSA. Here in Britain, the government that skimped on funding vital infrastructure for the National Health Service so that their computers didn’t get urgent security patches looks likely to be re-elected in a landslide, because the important thing is not what a government does in office, but whether its plans for what it would do get leaked to the press several days early.

Our distant descendants hunkering in their radiation-proof underwater bunkers will speak of “Donald Trump’s lawyer” proverbially, as an oxymoronic self-flagellating professions, the way we might speak of “Bernie Madoff’s accountant” or “Jeffrey Dahmer’s nutritionist” or “Water-safety officer on the Titanic”. Tom Lehrer spoke on one of his satirical LPs from the 1960s about people following the news with unease, feeling “like a Christian Scientist with appendicitis”. One might similarly say “I feel like Donald Trump’s lawyer”.

Our story to date: When last we saw Sheri Dillon it was a week before Donald Trump’s inauguration, and she spoke beside a table full of binders — none of which were ever seen by the public — which supposedly showed that Trump was taking some unspecified action that would resolve all legal and ethical conflicts arising from his business interests. They were the most prominent unseen-document-political-props since Joseph McCarthy’s infamous “list” of “known communists”. (Or perhaps Mitt Romney’s “binders full of women”.) END_OF_DOCUMENT_TOKEN_TO_BE_REPLACED

There has been a lot of reporting on this recent poll, where people were asked what word first came to mind when they thought of President Trump. Here are the top 20 responses (from 1,079 American adults surveyed):

The fact that idiot, incompetent, and liar head the list isn’t great for him. But Kevin Drum helpfully coded the words into “good” and “bad”:

What strikes me is that even the “good” words aren’t really very good. If you’re asked what word first comes to mind when you think of President Trump and you answer president, that sounds to me more passive-aggressive than positive. Similarly, you need a particular ideological bent to consider businessman and business to be inherently positive qualities. Leader — I don’t know, I guess der Führer is a positive figure for those who admire that sort of thing. Myself, I prefer to know where we’re being led. If we include that one, there are 4 positive words, 4 neutral words, and 12 negative. (I’m including trying as neutral because I don’t know if people mean “working hard to do his job well”, which sounds like at least a back-handed compliment, or “trying my patience”.)

Is there some cosmic law of recurrence that decreed that as soon as Donald Trump had decided to go full-Nixon by firing the FBI director who was investigating his crimes, Henry Kissinger would pop up in the Oval Office? 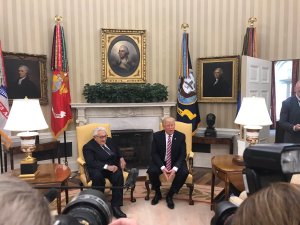 Was he really there in the flesh, or were the photographers astonished to find his image appear on the film negatives? “Where two or three are gathered to subvert the Constitution, there am I among you.”

The serious point is, this shows how Trump’s impulsiveness (fortunately) gets in the way of his authoritarian showmanship. Presumably, a competent would-be strongman would have found a moment to subvert the rule of law for reasons that HAVE NOTHING TO DO WITH TREASONOUS CONTACTS WITH MOSCOW (which didn’t happen anyway), when he wasn’t scheduled to meet the next day with the Russian ambassador and with Nixon’s National Security Advisor.

After the November US election I agreed with many commentators, who said that Comey really should resign for his failures of judgement or (depending on who you’re listening to) malfeasance with regard to the Clinton email server investigation, that it would provide partisan satisfaction for Democrats for him to be forced out, but that it was essential for the nation for him to stay in office as an independent check on the president’s authoritarian impulses. Some said he has the most secure job in Washington, since Republicans and Democrats both wanted to keep him, albeit for very different reasons.

We’re used to thinking of scandals as something that will damage the politicians involved if and when they come out, possibly driving them from office. But that’s not always how it works. That isn’t even really the fundamental dynamic. Hidden criminality by people in power locks them in a death struggle with the rule of law and the system of honest democratic politics. Only one can survive. If the politician has weak support, or self-doubt, or respect for democratic norms then it’s like a moon in Jupiter’s gravitation — for all intents and purpose we can just say it’s the massive planet (the constitutional system) acting on the small body. But it can be more like a black hole interacting with a star: Both are perturbed, and until they get close you can’t judge how massive the black hole is. END_OF_DOCUMENT_TOKEN_TO_BE_REPLACED