The European parliament has voted to stop the practice of switching clocks forward and backward every year, from 2021. I’ve long thought this practice rather odd. Imagine that a government were to pass a law stating that from April 1 every person must wake up one hour earlier than they habitually do, and go to sleep one hour earlier. All shops and businesses are required to open an hour earlier, and to close an hour earlier. The same for schools, universities, and the timing of private lessons and appointments must also be shifted. Obviously ridiculous, even tyrannical. The government has nothing to say about when I go to bed or wake up, when my business is open. But because they enforce it through adjusting the clocks, which seem like an appropriate subject of regulation and standardisation, it is almost universally accepted.

But instead of praising this blow struck for individual freedom and against statist overreach, we have Tories making comments like this:

John Flack, the Conservative MEP for the East of England, said: “We’ve long been aware the EU wants too much control over our lives – now they want to control time itself. You would think they had other things to worry about without wanting to become time lords,” he said, in an apparent reference to the BBC sci-fi drama Doctor Who.

“We agreed when they said the clocks should change across the whole EU on an agreed day. That made sense – but this is a step too far,” Flack added. “I know that farmers in particular, all across the east of England, value the flexibility that the clock changes bring to get the best from available daylight.“

So, the small-government Tory thinks it’s a perfectly legitimate exercise of European centralised power to compel shopkeepers in Sicily and schoolchildren in Madrid to adjust their body clocks* in order to spare English farmers the annoyance of having to consciously adjust the clocktime when they get out of bed to tend to their harvest. But to rescind this compulsion, that is insufferably arrogant.

*Nor is this a harmless annoyance. Researchers have found a measurable increase in heart attacks — presumed attributable to reduced sleep — in the days following the spring clock shift. A much smaller decrease may accompany the autumn shift back.

That’s what the “brexiteers” said.

Is there such a thing as “spineless pirates”? So many questions…

Liam Fox, the British international trade secretary, best known for confounding the Brexit critics with his stunning success in concluding trade continuity agreement with Andorra and the Faroe Islands, has stated in a radio interview that the government may just ignore the “indicative votes” that Parliament is expected to carry out, to express the will of Parliament on the way forward in Brexit. This is hardly surprising. The government, and Theresa May in particular, have been clear and consistent in their belief that a democratic government ought not to assign much weight, or allow themselves to be too much influenced by, votes that are formally non-binding. But I was struck by something else in Fox’s statement:

I was elected, as 80% of members were, to respect the referendum and leave the European Union. I was also elected on a manifesto that specifically said no single market and no customs union. That, for Conservative MPs who are honouring the manifesto, limits their room for manoeuvre.

This sounds pretty persuasive. We want politicians to honour their promises, particularly those that have been formally laid out in a party election manifesto. But it occurred to me — and I may be unusual in this — I never actually read the 2017 Conservative election manifesto. It’s available here, so I had a look.

The first thing I notice is that the single market and the customs union are each mentioned only once, and not exactly in the form of a resounding promise, but in a kind of passive construction:

As we leave the European Union, we will no longer be members of the single market or customs union but we will seek a deep and special partnership including a comprehensive free trade and customs agreement.

Is this a promise or a (mistaken) suggestion of inevitability? Why is it formulated in this weird continuing tense “as we leave the European Union” rather than “after we leave”? Why is that comma in such a weird, ungrammatical place?

On the other hand, the first thing the manifesto has to say about Brexit does sound like a promise:

We need to deliver a smooth and orderly departure from the European Union and forge a deep and special partnership with our friends and allies across Europe.

And then there is this:

We will restore the contract between the generations, providing older people with security against ill health while ensuring we maintain the promise of opportunity and prosperity for younger generations. That contract includes our National Health Service, which is founded on the principle that those who have should help those who do not.

Under the strong and stable leadership of Theresa May, there will be no ideological crusades. The government’s agenda will not be allowed to drift to the right. Our starting point is that we should take decisions on the basis of what works.

Many promises, and they can’t all be fulfilled. So the decision about which ones to abandon — no smooth and orderly departure or saving the NHS or ideological moderation, yes leaving the single market and customs union — is a free political choice. The government could say, well, whatever we think of the single market, we did promise a smooth and orderly departure from the EU, and the only way we can obtain that is to negotiate on the basis of staying in the single market. The deference to “promises”, the assertion of “limited room for manoeuvre” is a way of pressuring other politicians, and indeed the electorate. They don’t want a second referendum because they suspect that their policies don’t command majority support. So they refer to a promise made to a previous electorate.

I’m sure I’m not the only person in Britain somewhat nonplussed to discover that the British government’s secret contingency plans for no-deal Brexit — now swinging into operation — is called Operation Yellowhammer.

Let’s start with the decision to call it an “Operation”, as though they were preparing to storm the Normandy beaches. This is of a piece with the choice to call the feckless band meeting at 10 Downing Street to plan this shit show the “war cabinet”.

The name of such an operation is an unconstrained choice, pure public relations, so I can think of only a few possible explanations:

* Update: I have been informed that the yellowhammer is actually a widespread little yellow bird that does not travel between Britain and the European continent.

Donald Trump is concerned about a political movement that he believes harbors antisemitic views:

The Democrats have very much proven to be anti-Israel. There’s no question about that. And it’s a disgrace. I mean, I don’t know what’s happened to them. But they are totally anti-Israel. Frankly, I think they’re anti-Jewish.

But wait, you might be saying, aren’t the Democrats the favoured party of the vast majority of American Jews?

Everyone knows that antisemitism is a great evil troubling the world. And who are the pernicious globalists responsible for all the evil in the world?*

QED. So obvious it took an outside-the-box thinker like Trump to recognise it.

* Hint: Their name rhymes with the Enemy of the People. 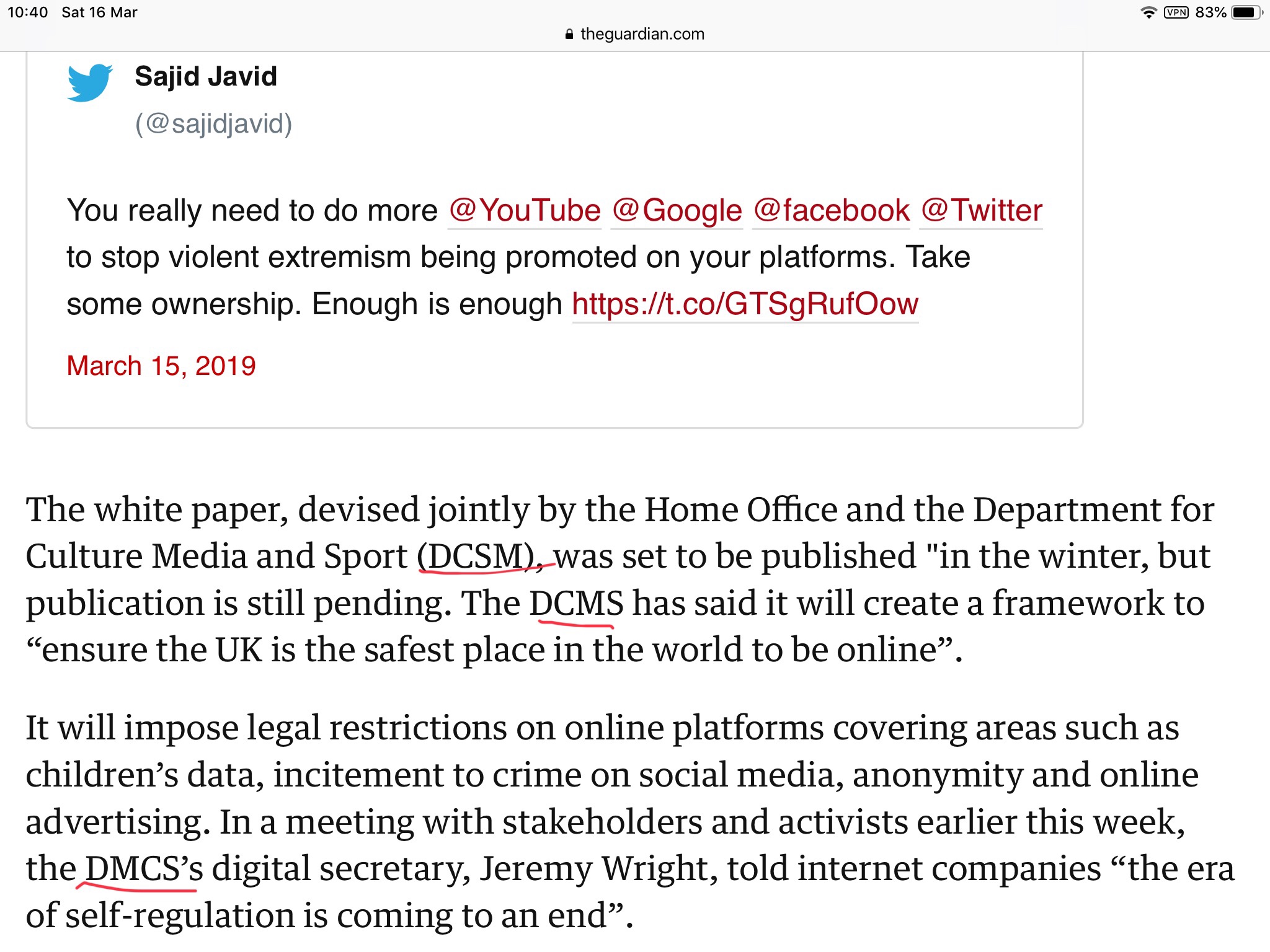 As we know, from the esteemed chronicles Lerner and Loewe, in Camelot

The winter is forbidden till December

and exits March the second on the dot.

By order summer lingers through September

Not to be outdone, the British House of Commons has ordered that the departure from the EU, that will happen in just over two weeks, shall not happen without a deal. Right after voting resoundingly to reject the only possible deal.

When I first arrived at Oxford I expressed admiration for the rigorously academic nature of the student admissions procedure. I have since soured somewhat on the whole segregate-the-elite approach, as well as on the implicit fiction that we are selecting students to be future academics, but I still appreciate the clarity of the criteria, which help to avoid the worst corruption of the American model. I have long been astonished at how little resentment there seemed to be in the US at the blatant bias in favour of economic and social elites, with criticism largely focused on discrimination for or against certain racial categories. Despite the enormous interest in the advantages, or perceived advantages, of elite university degrees, very little attention has been focused on the intentionally byzantine admissions procedures, on the bias in favour of children of the wealthy and famous (particularly donors or — wink-wink — future donors), the privileging of students with well-curated CVs and expensive and time-consuming extracurricular activities, the literal grandfather clauses in admissions.

Now some of the wealthy have taken it too far, by defrauding the universities themselves, paying consultants to fake exam results and athletic records. The most unintentionally humorous element of the whole scandal is this comment by Andrew Lelling, U.S. attorney for the District of Massachusetts:

Fraud is defined here as going beyond the ordinary bounds of abusing wealth and privilege. You pay your bribes directly to the university, not to shady middlemen. The applicant needs to actually play a sport only available in elite prep schools, not produce fake testimonials and photoshop their head onto an athlete’s body.

Of course, this is all fraud, because no one is paying millions of dollars because they think their child will receive a better education. The whole point is to lay a cuckoo’s egg in the elite-university nest, where they will be mistaken for the genuinely talented. For a careful (tongue-in-cheek) analysis of the costs and benefits of this approach, see my recent article on optimised faking.