In a Jerusalem cafe the other day I picked up a right-wing Israeli newspaper that proclaimed on the front page Netanyahu’s  intention to “boycott” those countries that disapprove of Israel’s settlement policies (i.e., all of them). No mention of “divestment”, but definitely sanctions are in the offing. Perhaps Netanyahu’s policy should be called “BS”.

While threatening to withdraw Israel’s assistance to Senegal, they are kindly agreeing to continue accepting US aid, but presumably only because the US abstained rather than voting in favour of the UN resolution. But those Americans are on thin ice if they want to keep the Israeli international aid flowing.

I just spent a few days as a tourist in Jerusalem. The city has many lovely and fascinating qualities, but it also felt generally stressful to be there. It got me to thinking, maybe in retrospect it wasn’t a good idea to put the Israeli capital in a city that is famous for making people crazy?

Now that Trump seems keen to move the US embassy to Jerusalem the two of them can join in a folie a deux.

It’s well known that marriage is an important factor in longevity. But maybe we’ve been interpreting that wrong, or, at least, not optimising.

In 1926, Mrs. Morano was married to Giovanni Martinuzzi, a marriage she would rather not talk about… Having separated – but not divorced – from her husband in 1938, Mrs. Morano has lived alone ever since, and accredits this as one of the key secrets to her longevity.

An adviser to Donald Trump today gave a new argument against the scientific consensus on anthropogenic climate change:

In case there was any doubt about the source of his independent scientific perspective, he summarised his argument

I’m saying people have gotten things wrong throughout the 5,500-year history of our planet.

(5500 is a remarkably precise number by the way. My intuitive response was to think he was a young-Earth creationist, but their best researchers invariably give the Earth an age above 6000 years. Perhaps he’s a moderate Omphalist?)

If he﻿ were, they would surely order him not to blow his cover by so blatantly promoting Russian interests. 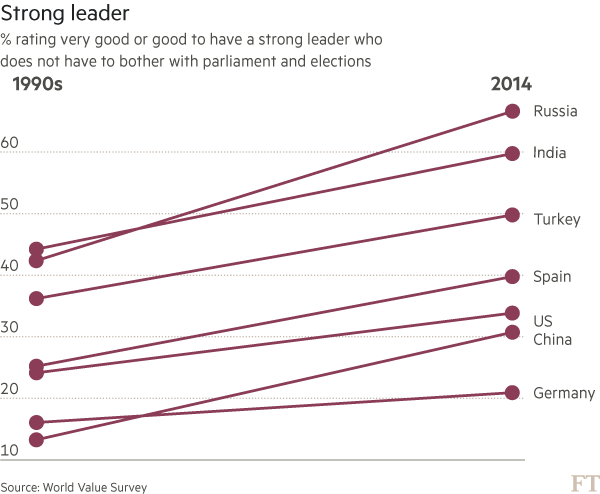 This plot from the Financial Times has been getting a lot of attention online. The data come from the World Values Survey (slightly incorrectly cited in the plot).

I don’t know what to make of it exactly, except to say that it supports my gut belief that Germany, more than any other country, understood after the Second World War, what it takes to cultivate a spirit of freedom and democracy. It was a long struggle, and they didn’t shy away from it. Education, the legal system, journalism: It’s the famous German thoroughness, applied to the problem of creating free citizens. The British, the Americans, and the French, each in their own way, considered democracy to be their inevitable birthright, and so have allowed relevant institutional arrangements and, even more importantly, the democratic spirit, to decay.

Maybe the Americans are just being more honest — in a Trumpian anti-PC way. Taboos are important. One important lessons that the Nazis understood was: Before you can commit unspeakable horrors, you need to find a way to make them speakable.

I’m old enough to remember when “relativism” was the second-favourite scare word hurled by the Right (after “socialism”, of course). The truth of the matter was that leftist intellectuals had put a lot of effort into analysing the way worldviews are created by and support particular power relations. This seems like good work, in principle, and obviously useful in interrogating the making of history, economics, and social ideologies, and has made important contributions to the philosophy of science. There have been excesses — edging into denial of scientific truth or progress.

The arch-cultural reactionary Dinesh D’Souza in his heyday (before he became completely ridiculous) used the then-modish term deconstruction as a catch-all for this iconoclastic posture toward literary and (it is implied, more than actually shown) moral authorities of the past to exemplify the inconsistent application of moral relativism as a political weapon:

Marx, for instance, never seems to be deconstructed, nor does Foucault, or Lacan , or Derrida, or Barthes. Malcolm X and Martin Luther King, Jr, seem to enjoy immunity. There may be an entire gender exception for women.

I’ve never been sufficiently au fait with the humanities and social sciences — “critical theory” — to judge whether these extreme denials of objective truth were ever as central to leftist discourse as some critics would suggest. I think this has been overall very productive intellectually and scientifically. But as a political tactic it was, it seems clear now, tragically short-sighted. The Left made a serious strategic error in trying to shortcut its way out from under the dead hand of the past  by promoting relativism and attacking the authority of science and rational discourse. The right wing were taking notes, and while the older generation — figures like William F. Buckley, John Silber and Allan Bloom — started by ridiculing the anti-rationalist turn, the younger generation saw it as a program to be emulated and developed. Fascists have always had an uncomfortable relationship with objective reality, that seems to be offering only stubborn opposition to the imposition of the authoritarian will.

Nietzsche — the doyen of this kind of analysis, but conflicted in this as in everything else — framed what should have been the core left-wing critique of relativism in Die Fröhliche Wissenschaft [The Gay Science]:

On account of his people’s business relations and past, the Jew is not used to being believed. You see this in the way Jewish scholars are obsessed with logic, that is, compelling assent through reasons. They know that they can succeed in this way, even when the prejudice of race and class tell against them, even when one would rather not believe them. Nothing is as democratic as logic: It recognises no personal distinctions, and takes even the crooked nose for straight.(Europe must be grateful to the Jews particularly with respect to logicalising — for clearer habits of thought. Above all the Germans, a pitifully irrational race. Everywhere where the Jews have gained influence, they have taught people to reason more precisely and write more clearly. It has always been their task to bring a people “to its senses”.)

And so we find ourselves in the 21st century with a senior adviser to a Republican president criticising, in 2002, the naivety of what he called the “reality-based community”, stating

That’s not the way the world really works anymore. We’re an empire now, and when we act, we create our own reality. And while you’re studying that reality — judiciously, as you will — we’ll act again, creating other new realities, which you can study too, and that’s how things will sort out.

And sure enough, as soon as a new Republican is elected, we have his surrogates even more openly attacking the very notion of objective reality:

And so one thing that has been interesting this entire campaign season to watch, is that people that say facts are facts—they’re not really facts. Everybody has a way—it’s kind of like looking at ratings, or looking at a glass of half-full water. Everybody has a way of interpreting them to be the truth, or not truth. There’s no such thing, unfortunately, anymore as facts.

And so Mr. Trump’s tweet, amongst a certain crowd—a large part of the population—are truth. When he says that millions of people illegally voted, he has some—amongst him and his supporters, and people believe they have facts to back that up. Those that do not like Mr. Trump, they say that those are lies and that there are no facts to back it up.

You may think you’re talking about facts and evidence, but for those on the inside these are just ways of saying whether you “like Mr. Trump”. They tried out their message first on evolution as a matter of “belief”, honed the message on climate science — a harder nut to crack — and finally brought us to where groundless claims that millions of people voted illegally are also matters of belief.

Speaking of Allan Bloom, the University of Chicago philosopher who had a hit book in the mid-1980s The Closing of the American Mind, which was mainly about how the kids today with their crazy rock-and-roll music were having more sex than he had at their age, which was driving him crazy. But I remember one really striking idea that he was pushing was that, just as the Romans conquered the Greeks militarily, but then as a consequence of absorbing the Greek world ended up being dominated by Greek culture and philosophy, so the Anglo-American world conquered Germany militarily, but are now dominated by the German Weltanschauung, and Nietzsche in particular.

From the BBC home page today:

And here I thought racial segregation was a core… oh, never mind.