I was reading this article by John Cassidy of the New Yorker about the current state of the US presidential election campaign, according to the polls, and was surprised by this sentence:

Of course, polls aren’t infallible—we relearned that lesson in the recent Brexit referendum.

It hardly requires any major evidence to argue against the straw man that the polls are infallible, but I didn’t recall any notable poll failure related to Brexit; on the contrary, I was following this pretty closely, and it seemed that political commentators were desperately trying to discount the polls in the weeks leading up to the referendum, arguing that the public would ultimately break for the status quo, no matter what they were telling the pollsters. I looked it up on Wikipedia: 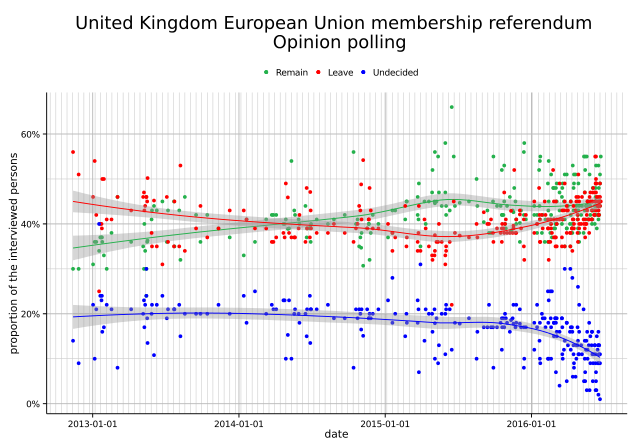 So it looks like the consensus of the polls was that Leave and Remain were about equal, with a short-term trend toward leave, and about 10% still undecided. Hardly a major case against the polls being infallible when Leave won by a few percent…