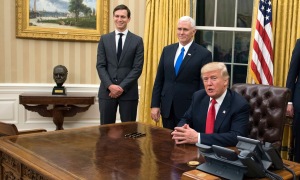 I pointed out a few days ago that we need to take seriously the idea that Trump’s British mother* indoctrinated him with radical colonialist ideologies. Now Trump has installed a bust of an arch British colonialist in a prominent place of honour in the Oval Office.

Imagine if Barack Obama had, as one of his first acts as president, installed a bust of Jomo Kenyatta in the Oval Office.

* An English colleague to whom I mentioned this theory said, “No, she was Scottish.”