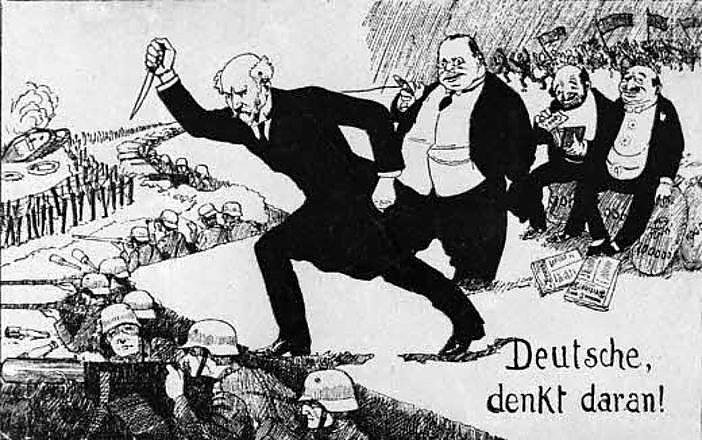 What Johnson wants is for one of two things to happen:

In either case Johnson then hopes to win a new election by campaigning against the traitors. It’s even better (but riskier) if the country is in chaos because of no-deal Brexit.

No one who actually hoped to make a deal would publicly declare that the other side must entirely abandon one of its key demands, that had already been conceded by a previous UK government, and suggest that their opposition is only a public negotiating posture. But it’s a perfectly good way of provoking a crisis, while allowing low-information voters to believe that he’s really tried everything.

A crucial ingredient in the poisonous brew of 1920s German politics that prepared the way for the Third Reich was the Dolchstoßlegende — the “stab-in-the-back myth” — that the German army had never been defeated on the battlefield, but had been stabbed in the back by traitorous business and political elites, the same ones who then signed the treaty, termed the “Schmachfrieden von Versailles” (the “Versailles disgrace-peace”). The Social Democrats and the moderate Catholic Zentrum Party were hobbled by internal disputes and attacks from the right that associated them — the “November criminals”, because of the November revolution that finally forced out the Kaiser and made the armistice possible — with the hated treaty throughout the Weimar Republic.

Boris Johnson is a student of history. His whole political strategy — and that of the Brexit ultras — is to write the stab-in-the-back story from the start, and to make sure that they’re not the ones whose signature is on the Schmachfrieden. Johnson may have insisted from the start that a Brexit deal would be easy, but he knows that any agreement will be hated once it is in effect. He is not going to play the role of Matthias Erzberger — second in line in the caricature above — the Zentrum leader who signed the treaty to forestall the complete occupation and dismemberment of the country, and sought to carry out its provisions in good faith. Erzberger was assassinated in 1921 by right-wing extremist military officers.

On the other hand, Philipp Scheidemann, the Social Democrat Chancellor who ostentatiously resigned rather than accept the Treaty, is the man portrayed above wielding the dagger. He escaped an assassination attempt in 1923, fled the country when the Nazis came to power, and died in exile.

Behind them all, of course, two Jews sit on moneybags, with Fake News newspapers at their feet.