I remember reading, back in the late 1990s, an article in Spiegel, about the dubious decision of the Euro finance ministers to create a 500 euro banknote. Since the only people who use cash in significant quantities in this millennium tend to be shy people eager not to be singled out for their achievements by prosecutors, the question was raised, why would you want to create a unit of currency that enables law-abiding citizens (and others) to pack five times as much currency into a suitcase as the former favourite $100 bills?* The answer given by Edgar Meister, one of the directors of the Bundesbank, was that Germans had gotten used to having a 1000 Mark banknote, and that if the largest Euro banknote were worth less, people would think this new currency was a weakling.

A currency that can afford to produce such large banknotes must be solid.

As everyone knows, that’s why Germany produced this 50 million Mark note in 1923: 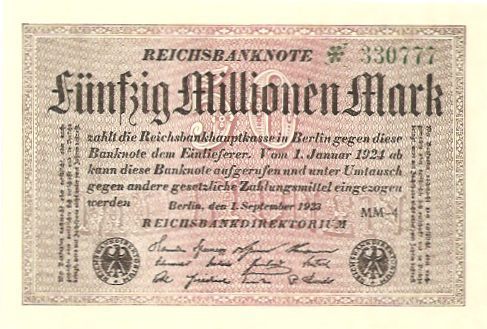 It went a long way toward bolstering public confidence in the soundness of the currency.

Now the Guardian reports that the 500 Euro note may be withdrawn, as a former leading bank executive, Peter Sands, has discovered that large-denomination banknotes are being used by criminals. I’m shocked.

*  The real reason was, of course, that when criminals take large quantities of your currency and pack it away in suitcases, that’s a big win for the central bank that produced the notes for almost nothing, and has now effectively sold them off at face value. As long as they stay packed away in suitcases and are traded around in the underground economy, they don’t cost the central bank anything. The nascent ECB was eager to grab some of this organised-crime action away from the Fed.