… and the “pussification of America”. This term came up in an article in Slate about the decision by the American retailer Target to remove the gender attributions from its toys. Since I had children I’ve been amazed at the extent to which children’s clothes and toys have become gender-specific since I was a child in the 1970s. And it amazes me as well how closely identified the colours pink and blue have come to be with girls and boys, despite the fact that it’s an obviously artificial (and quite recent) tradition. (Jo B. Paoletti has written a book on the subject, Pink and Blue: Telling the Boys from the Girls in America.) I have also long been intrigued by the way people seize upon even the most tenuous evidence that “science has proved” the validity of this or that gender stereotype.

Anyway, someone set up a honeytrap fake Target customer service Facebook account to collect the outrage that some people (men and women) were spewing over this issue. As chronicled in AdWeek, there are some biblical arguments, like

God made a difference between male and female as there should be. I would never give a boy a barbie doll. It’s not chauvinistic but the BIBLE says women are the weaker vessel I Peter 3:7 so many people are making their boys the weakest link and making their daughters manly.

(Interesting that “as there should be”. Not that she’s simply going to accept on faith that God got this one right. But she approves.) And many rants against PC

You guys should listen to the people who spend money in your stores, not the liberal, PC Complaint people that don’t have two cents to rub together.

I thought the PC Complaint people were wealthy elitists… 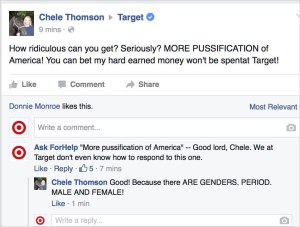 This is classic Simone de Beauvoir stuff. This is an American woman, outraged at a refusal to emphasise gender distinctions, because it will feminise America. Because America is a man, and if America can’t get a steady diet of trucks and toy soldiers when he’s a boy, he’ll be “pussified”. She’s not concerned that America will be toughened, or dickified, or whatever the corresponding word for “pussified” would be.