It seems like it’s a pretty solid PR principle that if your political party is bragging about what you’ve done for “them”, it’s going to seem more like pandering than like identifying with “their” core interests. Thus the Conservatives and “hardworking people” (as opposed to just “working people” who, we know, are hardly working, and usually on the dole). After presenting their hyper-pandering budget with tiny cuts to taxes on beer and Bingo, they went and boasted in a pretty crude advent that blew right across the narrow line between self-promotion and self-satire: 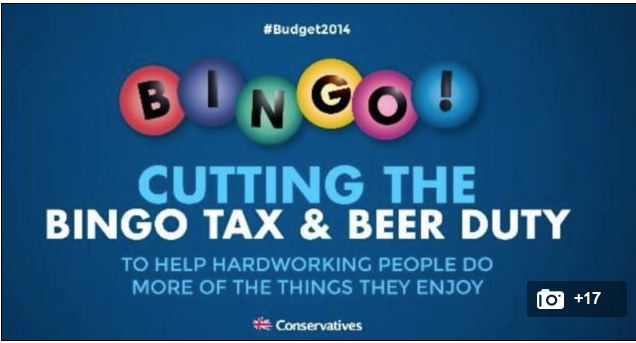 “The things they enjoy”? It’s this sort of thing that puts hardworking political satirists out of work. Who can top this? Even if you support the goal of cutting taxes on lower earners without judging what they’re using the money for, this is a really odd framing. Could it really be a Conservative priority to encourage people to drink and gamble more? And, of course, this just confirms the way everyone just assumes the Conservatives talk about the sub-Etonian classes when they’re strategising in their country homes.