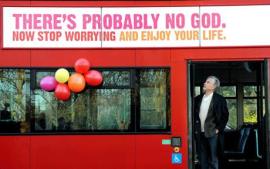 The famous atheist buses have come to Oxford. What do they mean — other than that the redoubtable Richard Dawkins has found a new venue for self-promotion? I have already commented on the peculiar place — or, at least, what seems peculiar to someone who has generally lived in basically secular, non-theocratic countries — of religion in the public sphere of the UK, which appears to outweigh by far its importance in the private sphere (but maybe that’s just Oxford). It’s hardly a surprise, then, that the Anglican atheists would crave public acknowledgement of their private obsessions. The public forum par excellence is the public bus. The Christians are already there, and the atheists now have their gospel plastered on the side, saying “There’s probably no god. Now stop worrying and enjoy your life.” (Or is it “no God”? Hard to say, given the typography…) For those craving more detail, there is a url for Dawkins’s website. (Which, interestingly, when I checked it just now, featured a large photograph of the man himself, next to the slogan “The Enemies of Reason”. He seems to be selling DVDs, which perhaps reveal whether he is numbered among the enemies, or the enemies of the enemies. I’ve heard he once had ambitions to be a scientist, which explains a lot, when you think about it.)

To those of us outside the movement, it seems like an odd slogan on many counts. Here are some poll results about the top issues that people say they are worrying about, and God doesn’t seem to be on the list. Admittedly, the survey is a year old, and it’s American, so it could very well be that God would place more significantly in an up-to-date UK poll. And the focus is mainly on environmental issues, which God certainly is, if you think about it, but maybe not in such a way as to leap the appropriate synapse. Let us stipulate, then, to the belief that, if not a majority, at least a substantial number of Oxford denizens are troubled, or, at the very least, made uneasy by God’s threat to exist, or to continue existing if He has already been doing so. Would this declaration that there is “probably” no God set their minds at rest (so that they could enjoy their lives, finite though they may be)? It certainly seems an uncomfortable fit to the chosen medium of omnibus billboard, where more conviction in the message being promoted is rather the rule. This may be merely a matter of economics. You would not want to cover the buses with penetrating commands to adopt the new best-of-the-best washing powder, only to be forced to scrub them off a month later, when new evidence demonstrates that this detergent wasn’t so hot after all. Usually the expensive bus-advertising campaign comes pretty late in the game, long after the advertisers have convinced at least themselves of the truth of some reasonably assertive slogan, or at least of its plausibility. “Branton’s Bramble-based Blueberry Bread is probably as good as most, and often reasonably fresh” may be a true statement at some point, but there are less prominent venues for this message, and the side-of-the-bus-in-foot-high-letters can wait until you have a bit more confidence.

We posit a finely balanced nervous temperament — call him Søren — quite capable of skepticism on all points, but fearful and trembling at the near-certain or quite likely prospect of divine judgement, who would greet the good news that divine justice is, while possible, not probable — plastered on the side of a humble public conveyance, surely Søren would smile at the irony of that — with a shudder of relief. And so, he would at long last rush out to marry pretty Regina and sire a brood of lively, happy, atheist children. And yet, we can imagine this Søren, and feel for his plight, but still wonder whether there are enough British Sørens to justify spending well over £100,000 to spread the good news. (He might be a Scandinavian tourist, though. The cost-benefit calculation is more challenging than you might think at first.)

Thomas Jefferson famously remarked “I tremble for my country when I reflect that God is just, and his justice cannot be denied forever.” Perhaps, had he believed merely that “his justice might not be denied forever”, or even that “his justice probably will not be denied forever”, then old Tom could have given up his trembling. But then, if he weren’t kept awake nights trembling before the spectre of divine justice, who else would have found time to invent the swivel chair? Perhaps they could take a leaf from the book of the US Department of Homeland Security, broadcasting a constantly updated “Divine Threat Level”, based on the most up-to-the-minute, as evaluated by a crack team of theologians. (Would they be allowed to resort to “enhanced interrogation methods” to procure information? We would hope it would not come to that, but confronted by a being who not only is believed to have the capacity to snuff out all life in the universe, but is known to have boasted of this ability and made specific threats in that direction, collecting actionable divine intelligence must have the highest priority.)

So, if the message doesn’t seem to make much sense, could it be that the goal is something else? There was recently a fair amount of publicity attending a bus driver who refused to sit at the wheel of an atheist bus. Of course, there’s no such thing as bad publicity, and I have no doubt that this little dust-up helped fill the atheist coffers. What would provide even better publicity? What if a religious fanatic blew up a bus full of heathens with blasphemy stenciled across its side? That would certainly attract attention, and the pictures of the burning bus with “There’s probably no god” would be beamed around the world, demonstrating once and for all the nature of the enemy. Not that I think any of the leading humanists is actually hoping for a terrorist attack. They are honourable men and women all. But Dawkins, who not only replied off the cuff to a questioner that the suffering of children molested by paedophile priests pales in comparison to the harm inflicted upon those same children by their parents in choosing to raise them Catholic, but was proud enough of this jolly bon mot to boast of it in a book, clearly thinks that ideological purity is worth quite a bit, when paid in the currency of other people’s trauma.

One thought on “An Omnibus named Perdition”